Sometimes you forget important things and that’s what happened with my car which was meant to go for a fitness test this year. The laws in Mauritius state that a vehicle needs to go for its first fitness test after 7 years from first registration (for imported cars, it will be the date it was originally registered in that respective country), otherwise you will be get a fine of Rs500 for using a vehicle without a valid test certificate (Section 15(1)). Well my car was registered in March 2006 in Japan and I was supposed to take it for inspection in March this year but I totally forgot. 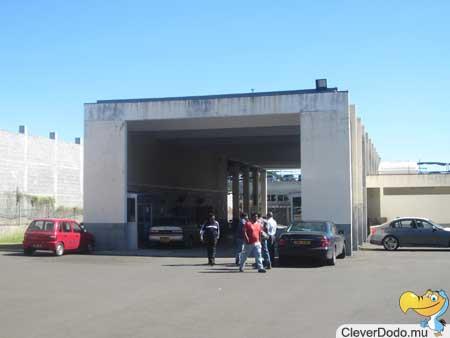 So last Monday, I did a research and found there were only 2 Vehicle Inspection Centres on the island; one at Plaine Lauzun and the other one at Forest Side. So I called the Plaine Lauzun Centre and got an appointment for 1 week later. Although there are 4 different numbers for the test centre, only one actually works (212 2719 ) and most of the time it’s busy, so you have to try many times before you get connected to an agent. The person who answered my call sounded sleepy (at 09:45) and seemed as if he didn’t want to be there and do his job. He gave me a reference number (3 digits) which I noted.

How to get there

One day before my appointment, I tried to look where that Plaine Lauzun Centre was located and Google Maps indicated somewhere in Coromandel. Since I wasn’t too sure where to go, I called the centre to ask for directions and was greeted by the same sleepy person who didn’t do a good job at explaining where the centre was found. Fortunately though, I met my cousin on the way and he told me it was located near Cite Vallijee. If you’re coming from Port-Louis, you have to turn left immediately after Kia Motors (Sam Motors) and on your right you’ll see a bus terminus. If you follow the road all the way straight ahead, you’ll see Tara Industries on your left and the first right you see, you need to take it. Once in that road, you’ll see Roger Fayd’Herbe & Co Ltd on your right and if you continue a bit further, you’ll find a road on your left and that’s where the Plaine Lauzun Centre is located. 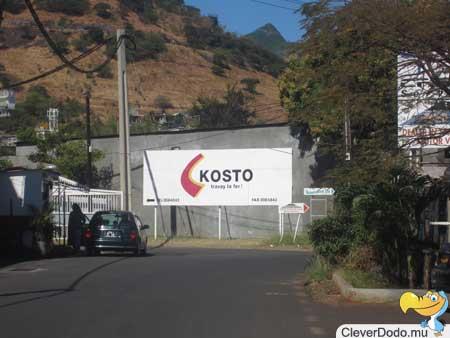 What to do once you’re there

There is a big dedicated parking space inside the centre but you can also park outside on the road as well if the parking area is full. Note that the first entrance you see on your right when you turn into that road is for vehicles going for inspection and you should go to the second entrance instead to pay for your appointment first. 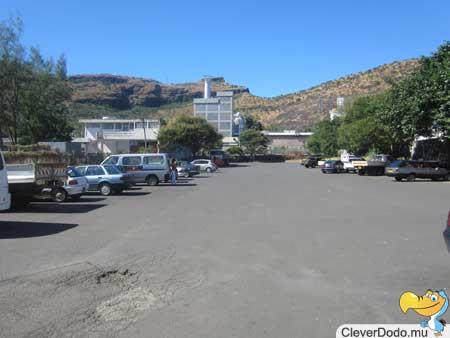 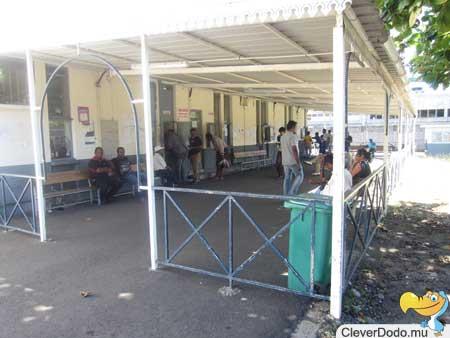 Once at the centre, you’ll need to go to Counter 1 to make payment for the fitness test and they are open from 9am to 3pm except for 30mins break at 12. For motorcars, you will pay Rs400 and they will ask for your appointment reference number and your horsepower. They will retain the horsepower and tender you a receipt and tell you to take your car to a lane number; mine was 2. So drive out and go to that first entrance in the lane they stated. 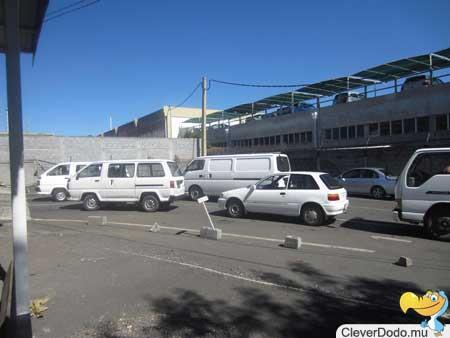 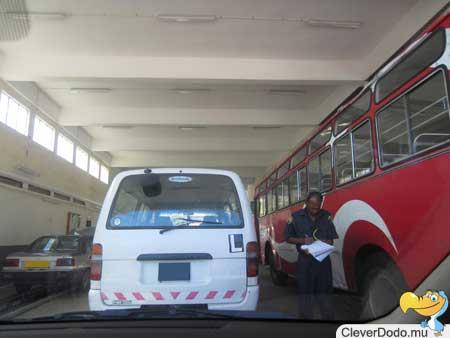 A security guard will make note of your vehicle registration number and the current time. As I was sitting in the car, I decided to take a few pictures and overheard the inspector on my right telling the owner of the car that because his front licence plates were attached by adhesive tape, it was enough reason to fail his fitness test. The driver pleaded and said it happened this morning only but he was going to get it fixed straight away. His car was a 06 one and the inspector decided to pass him after his little scare.

On my left, there was an old car, probably manufactured in the year 1998 and the mechanic asked the driver to open his bonnet and start his engine. He then pulled something to make the engine go faster and told the driver his exhaust was making a bit too much noise. He then went underneath the car to check something and I did not manage to find out what happened next because an inspector was ready for my car. 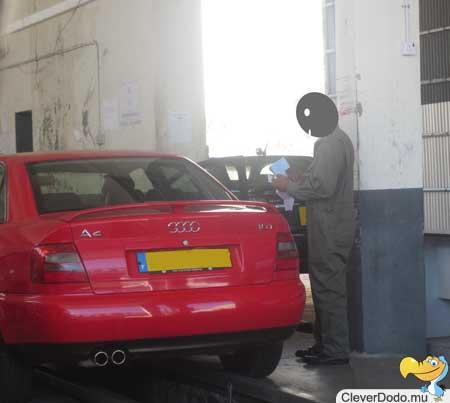 So the mechanic/inspector looked briefly at my car (15 seconds max and just the outside!) and asked me for my insurance certificate. I showed him my insurance contract but he insisted on seeing my "carnet d’assurance" which I thought was the insurance contract. He asked me to remove my car from the inspection centre and go to the parking area where he will meet me. So I parked and asked someone what exactly was that "carnet d’assurance" thing and the guy showed me his. I quickly went through all the documents I brought with me and fortunately came across my insurance certificate which was attached to a little "carnet". I went back to the inspection centre because the inspector was not coming to me and showed him my insurance certificate but he had already completed the vehicle inspection report sheet for my car and handed it to me as well as my horsepower and asked me to go and submit the report at Counter 4. 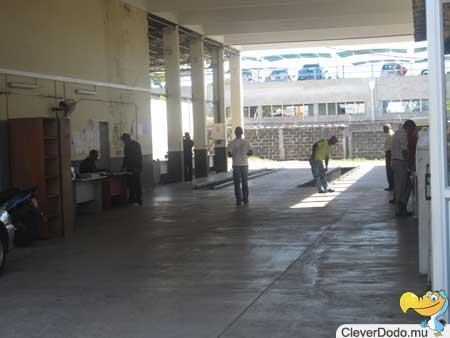 I was astonished because he didn’t check anything at all! It then occurred to me that only older cars and vehicles which are in bad shape are in actually inspected. It makes sense as well because on average 400 vehicles are checked at a Vehicle Inspection Centre and to meet with that demand, you obviously will not be checking vehicles thoroughly. It is actually very dangerous to be conducting inspection like that because many vehicles which are not roadworthy are overlooked and it increases the chances of accidents. 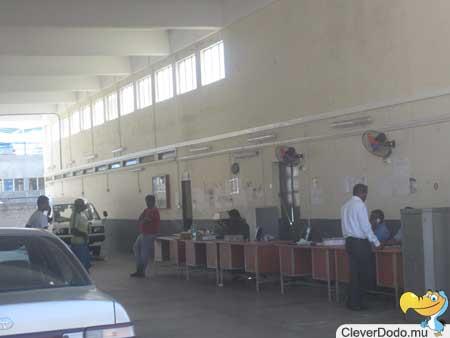 Anyway, I proceeded to Counter 4 where I submitted my horsepower and vehicle report and was told to wait before they issue me with my certificate of fitness. After a couple of minutes, someone called from Counter 5 and gave a fitness test certificate which is valid for 2 years. So next time I’ll have to there is in 2015!

I thought a whole day would be wasted at the Plaine Lauzun Centre but it took me around 1 hour only. There’s toilet facility at the premises and a person selling food at the entrance as well. 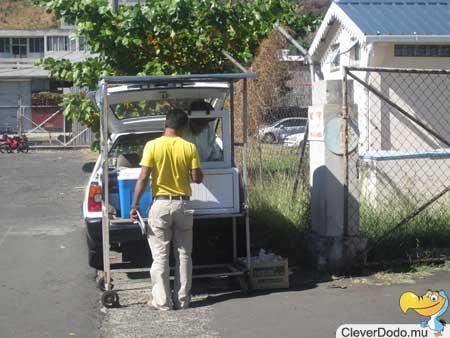 The government needs to take this fitness test more seriously. There are a lot of old cars on the road and they need to crack down on those which are not fit to be driven. I believe safety should always be a priority and they should do more to thoroughly inspect vehicles and only issue a fitness certificate when they are sure the vehicle is definitely roadworthy.

gices Published 17 Jun 2013
1
I'm a Software Developer and the founder of Clever Dodo. I encourage people to practice MAM (Movement/Arts/Meditation) for a well-balanced and happy life. Born in Mauritius and now living in the UK, I usually blog about fitness, music, spirituality and driving topics to pass on my knowledge.

You may want to check out our Oral Driving Test Course as well.
245 members . 106 topics . 347 posts
Join Community

Good lol. Fortunately, you were 'clean' on police records for the past monhs :P

Definitely, there's clearly a lack of indication but since no one complained, I guess that everybody finally found their way :-)

Wait. Did you mean that you had no fitness from March 2013 to June 2013? Normally, he should be fining you or at least give you some sort of warning. I might be wrong but I know that vehicles which are correctly regulated like here, need the vehicle to be towed to the center for its inspection.

Now, coming to the inspection itself, I usually go there after 1pm or at around 2pm. There's less people and hence no time lost waiting. Everything goes so fast. Once, I reached there at 3pm and one of the guys working there was looking for a lift to port louis. He asked me if I could drop him and he took my papers to make the necessary so that I could get my car inspected immediately :P

Last point: On one of my visits, the officer asked me if "tone ammene l'enveloppe". I did not understand anything and replied him "non".
Later, I understood that he was looking for a bribe (dithé) but my car was in good condition, so he did not bother to explain to me what he wanted exactly lol.

btw, I get lost each time I go there. LOL!

When I called to make my appointment, I asked whether I would be fined for being late in getting my car's fitness certificate and the guy told me it was not like road tax and there's no penalty for any delay except when you're stopped by the police and you're unable to produce a valid certificate.

There's no proper indication where the centre is located and the road works close to the area does not help at all. I followed the diversion on my first go and ended up on the motorway!

does anyone know how it is done at Forest Side? Thanks

I think you should check the accidents that occurred, how many are new cars and how many are old cars... Astonished you will find that new cars are most involved....

I heard 4 new test centres will open soon and the vehicle fitness check will be privatised and have more modern equipments. Hopefully then, they will crack down on those cars which are unfit to be driven.

Very helpful. Thankyou. Someone who needed help knowing how to manage!

This site is very helpful and has saved me of many a hassle this morning. I was through the entire procedure within one and a half hour, inclusive of going to the Post Office for the payment of the Road Tax at Bell Village where I was re-directed to the NTA itself for the payment of a penalty. Well done. Thanks.

Ne
Ba
27 replies
60.6K views
The Process of Buying and Selling a Car in Mauritius

At
ba
bo
21 replies
3.3K views
Is it easier to pass the driving test in an automatic or manual transmission car?